What’s the story in Balamory? All those parents amongst us may remember catching up with the adventures of Archie the Inventor and watching with our kids as he turned everyday objects into creative solutions… well, now fiction has become reality.

Enter Robin Whitehead-Binns, who has been a valuable member of our Volunteer team for the past year and has more recently revealed his hidden Inventer persona! Robin, 47, who volunteers as a sighted support volunteer at our drop-in groups has been proving that it’s not just the multi-million pound tech companies that can come up with ideas for useful vision loss related assistive technology.

And it all stemmed from a conversation Robin had with our Chair of Trustees, David Quarmby. David, who is registered blind and a guide dog owner, was commenting that one of his biggest struggles was being aware of obstacles in his path at head or shoulder height such as unkempt foliage or lorry wing mirrors. Robin went away from that session determined to find a simple and usable solution. Fast forward a very short space of time and Robin proudly demonstrated his version of a Sensory Hat during one of our group sessions. 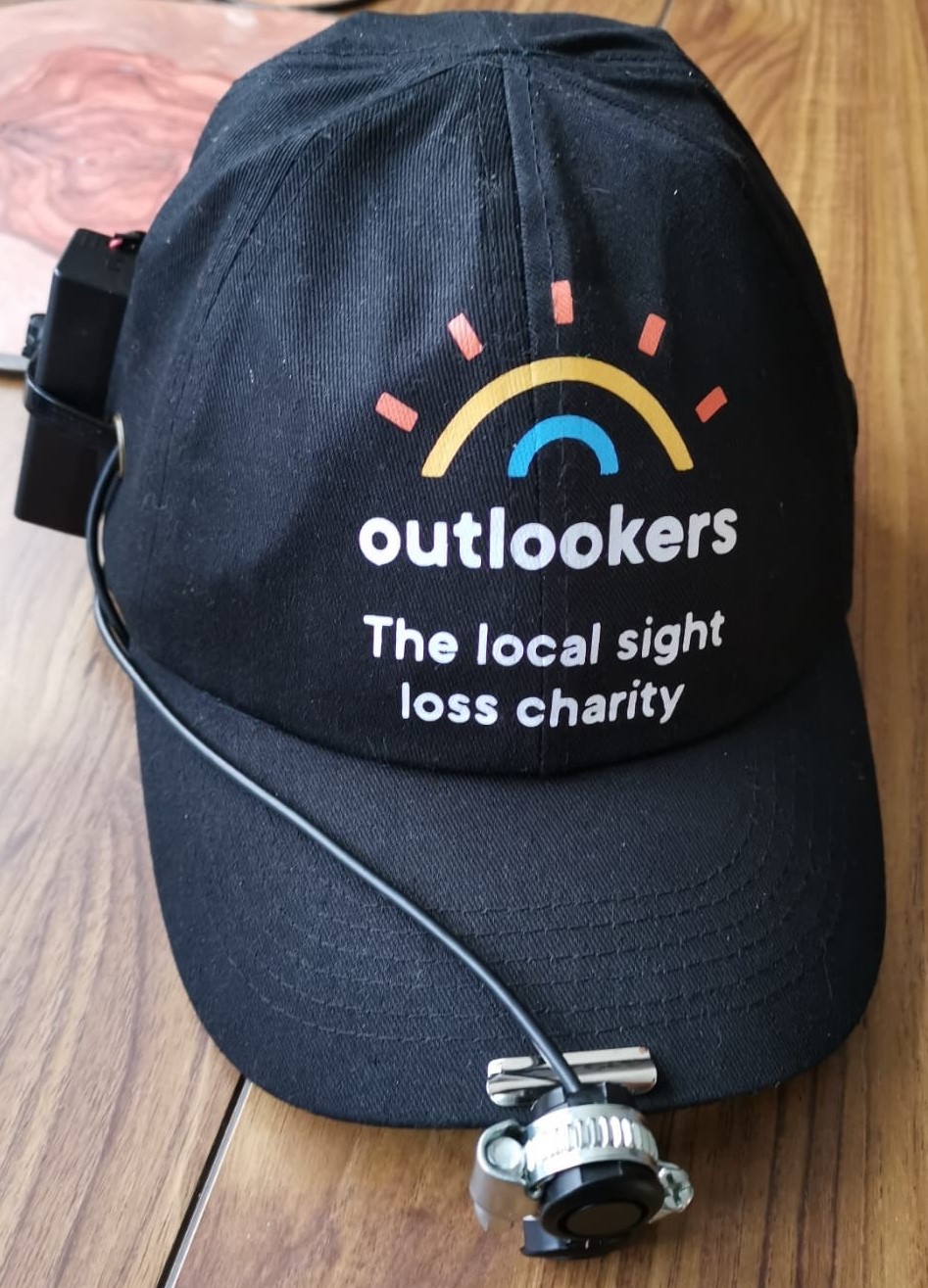 The hat is basically a heavy-duty baseball cap that incorporates sensors and an alarm alerting system, notifying the wearer of head height barriers and obstacles (it plays a beep sound as you near an obstacle like a wall. The beeping speeds up as your head nears the obstacle and then changes to a constant beep when you are really close). Whilst still only a prototype, it has proved a very popular solution with the members who have had the opportunity to test it out. And whilst unfortunately patents for wearable sensory items of clothing already exist, it’s great to know that simple and affordable solutions are out there using everyday items – in this case the sensor involved is actually built from a car parking sensor!

Here’s what one of our members, Adeel, had to say about it:
“Today, after hearing about it for several weeks now, I got to finally get my hands on and try out the prototype Sensory Hat at one of our Dewsbury group sessions. For people that use long canes, it is easy to miss obstacles that are above leg height and finding entrances/exits and lining oneself to be parallel when walking alongside a wall is always an issue.
I love the design and concept. With a bit of refinement and speeding up of the response time, I can see this being a very useful device for detecting obstacles at head height and to find walls and doorways. I’ve tested other gadgets like this before which haven’t been very good due to how bulky they are or where the sensor has been mounted e.g. the Sunuband is a similar gadget that is in the design of a watch and you put it on one arm and then it vibrates as you move along. It can be tricky to position the sensor in the right direction as you are walking. With the sensor on this being mounted on a baseball cap, the user just has to turn their head in the direction of where they want to check, which is more natural. The other thing I like is that this isn’t too geeky looking and is fairly unobtrusive compared to similar products. It is also very intuitive to use.
I am very impressed with the obstacle detecting hat and looking forward to how this gadget develops”.

Robin said on Twitter “So I do some volunteering for a local sight loss group and after seeing some of the gadgets that they try out from different companies, I decided to do something with easily obtainable tech. Basically this was a parking sensor kit I got from Amazon and incorporated it into a hat“.

And that is not Robins only attempt at innovation. Being amazed by the uses of apps such as “Lookout” by Google or “Seeing AI“, he set to work trying to find a way to implement them into smart glasses. Using some second-hand virtual reality goggles, he managed to find a way to fit a smart phone into the workings of the unit allowing the visually impaired wearer to see the world as described by the forementioned apps. Once again these are only basic prototypes but proved popular with our members who gave the concept a try.
What creative solutions he will come up with next is anyone’s guess, but we look forward to testing out any of Robin’s future inventions – watch this space…